Cambodia Does Not Trade Sovereignty for Aids or GSPs: PM Hun Sen

The premier received a courtesy call from high representative of the EU for foreign affairs and security policy and vice-president of the European Commission Josep Borrell Fontelles, held on Thursday (Aug 4) morning at the Peace Palace Phnom Penh.

According to the premier’s personal secretary Eang Sophalleth, the meeting touched on various issues such as the EU development cooperation in the kingdom, Everything But Arms (EBA), ASEAN-EU anniversary, Russia-Ukraine war and the Myanmar crisis.

Both sides still expressed the desire to foster Cambodia-European relations and cooperation.

Samdech Hun Sen lauded for the fruitful outcomes of the 11th Cambodia-EU joint committee meeting in March 2022, which contributed to fostering the Cambodia-EU relations and cooperation. He also thanked the EU counterpart for providing cooperative assistances to the kingdom since 1992 and COVID19 vaccines via COVAX Facility to fight against the pandemic and help socio-economic recovery.

In response, Josep Borrell informed the premier that he visited Siem Reap province and trekked for 16 hours around the Angkor Arachnological Park. He added that Cambodian temples not only illustrates the arts, but also the architecture and the history of mankind. He also supported and praised Cambodia’s ASEAN chairmanship.
=FRESH NEWS 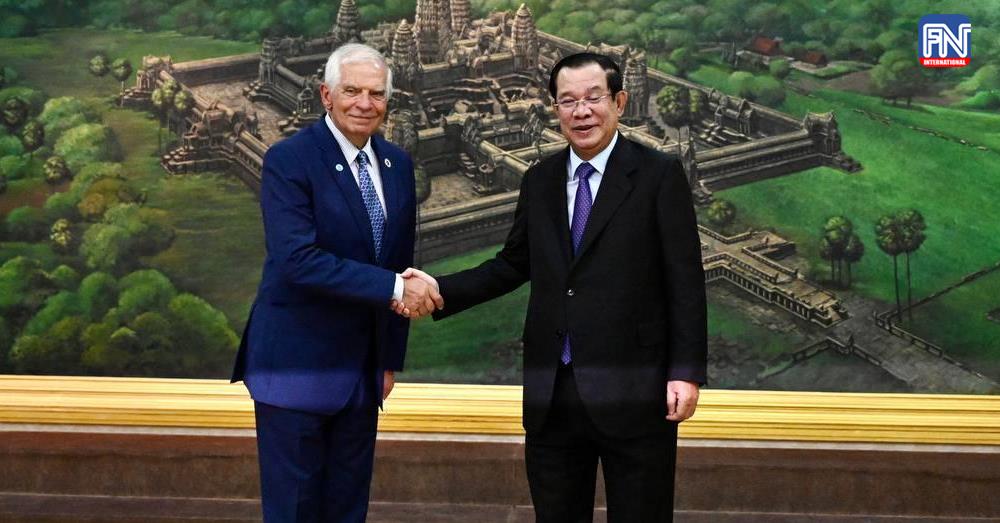