On the Edge of All Out Conflict: Domestic Sources of Tension over Taiwan

Phnom Penh (FN), Aug. 7 – On 2 August, the speaker of the US House of representatives and the third highest ranking US government official, Nancy Pelosi, visited Taiwan. This visit drew strong responses from China that go beyond rhetoric to include massive military drills deep into Taiwanese claimed territorial waters. What prompted speaker Pelosi to visit Taiwan? What caused such a strong reaction from China? What will be the potential fallout from the visit for Sino-U.S. relations and for the Southeast Asian region? What should ASEAN do as a regional forum?

Realists would argue that a rising China has challenged the United States’ hegemony in the Asia Pacific region. Taiwan is the clear target for China’s expansion of its power. Control over Taiwan will give China’s control over its economy and technology. Control over Taiwan will provide China with a strategic position in the Pacific theater, as Taiwan is labelled an unsinkable aircraft carrier by military strategists. Therefore, the West needs to go to great lengths to defend Taiwan because its fall would create a domino effect enabling China to project its power in the East and South China seas. This situation will threaten the security of U.S. and its allies such as South Korea and Japan and the vital shipping lanes of the Asia Pacific region. These explanations have merit. However, the timing of the visit by Pelosi to Taiwan requires explanation beyond this realist perspective.

To understand Nancy Pelosi’s visit and swift China’s responses, it is imperative that we look at domestic issues within China and the United States. It has been reported that Pelosi’s visit was not undertaken as an official decision of the government of the United States. President Biden claimed that Pelosi’s decision to visit Taiwan was beyond his control because of the separation of power between the executive, legislative, and judiciary branches of the United States government. This justification is unfounded. After all, speaker Pelosi and president Biden are from the same party. Furthermore, in foreign policy the president has more prerogative in setting the agenda. In short, Pelosi certainly coordinated and shared her assessment of the risks of such a visit. Both Pelosi and Biden realized that the visit would spark strong protest from China and it would have broader implications for US-Sino relations and US national and regional security. The question then is why did the US government allow the visit to take place? The catalyst for the visit rests in domestic politics within the United States. In the United States as in other democracies, the top priority of politicians is to get themselves and their party representatives elected even if this disrupts relations with other countries in this case China. After four years of a tumultuous Trump presidency that had failed to control COVID19 pandemic, while maintaining a profitable economy for business but not for many working class Americans, a slim coalition of American voters voted for Biden and his Democratic Party. These voters hoped to see a fast-rebounding economy. To the contrary, the US economy continues to face high inflation. In its defense, the Biden administration and the Democratic Party blamed the US economic trouble on the Russian invasion of Ukraine and China’s economic policies. They are selling the idea that authoritarian powers, if left unrestrained, will cause global havoc. Russia’s invasion of Ukraine is an example par excellence. It was the Western world’s negligence to check Russia’s power that allowed it to create turmoil in Ukraine, which now has global economic consequences of historical proportion. Like Russia, China, if left unchecked, will use military force against Taiwan. If this were to occur, the Western world will face systematic change of tectonic proportions.

In her Op-Ed in the Washington Post published ahead of her trip to Taiwan, Pelosi writes: “As Russia wages its premeditated, illegal war against Ukraine, killing thousands of innocents — even children — it is essential that America and our allies make clear that we never give in to autocrats.” Pelosi and Biden capitalize on Americans’ negative views of China in the hope of winning the midterm elections taking place in November. According to recent polls, about 82% of Americans have an unfavorable view of China.

Similarly, for China, its strong reaction to Pelosi’s visit has roots in its domestic politics. The Chinese Communist Party had revitalized its legitimacy, following the disasters of the Great Leap Forward and the Cultural Revolution, through promoting economic development. Of course, China’s economy has leaped forward and the standard of living of the Chinese people has increased at a pace and scale unprecedented not just in Chinese history but in world history. However, political legitimacy based on economic development has its limits. The COVID19 pandemic and China’s zero tolerance COVID19 policy has slowed the country’s economic growth. During this time of economic uncertainty, the Chinese Communist Party has relied heavily on nationalism to maintain its legitimacy. Making China rich again has been reinforced with the drive to make China great again. Restoring China’s greatness first and foremost demands the reclaiming of its territorial sovereignty and integrity. This requires that no part of China, in this case, Taiwan, should be recognized by other countries as an independent entity. Polisi’s visit to Taiwan, over strong Chinese objections, is tantamount to the United States’ recognition of Taiwan as a de facto independent state. This is understandably unacceptable to China. Furthermore, President Xi Jinping is preparing to be chosen for a third term as the president of China. He wants to appear strong for that, but does not want to start a war with Taiwan.

A Khmer proverbs states that “when elephants fight, ants die.” The ongoing Chinese military drills are unlikely to lead to an invasion of Taiwan in the manner of Russia’s military exercises in advance of its invasion of Ukraine. However, the possibility is there. If that happened, smaller countries in the Southeast Asian region would bear the burden of economic fallout and be forced into difficult strategic choices. Thailand and the Philippines which are U.S. Treaty Allies will be absorbed into the conflict. Southeast Asian economies which have become increasingly linked to China will suffer. In light of this massive fallout, it is imperative that ASEAN as a regional organization needs to remind the United States that it should not permit its domestic politics to cloud its security strategy. Furthermore, ASEAN should tell the United States that it needs to behave, as it has repeatedly said to China, as a responsible global power. The US claim that China is overreacting to Pelosi’s visit is like using a basket to hide an elephant. 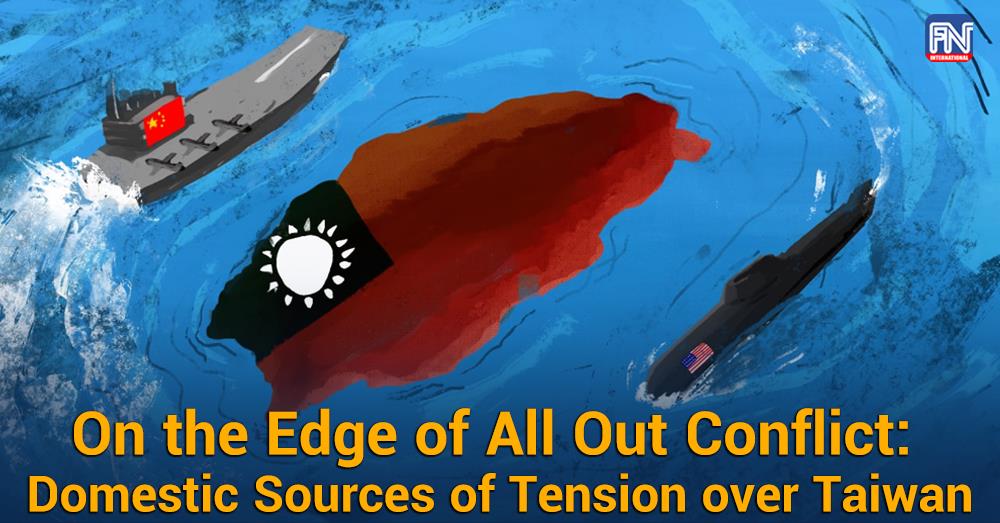 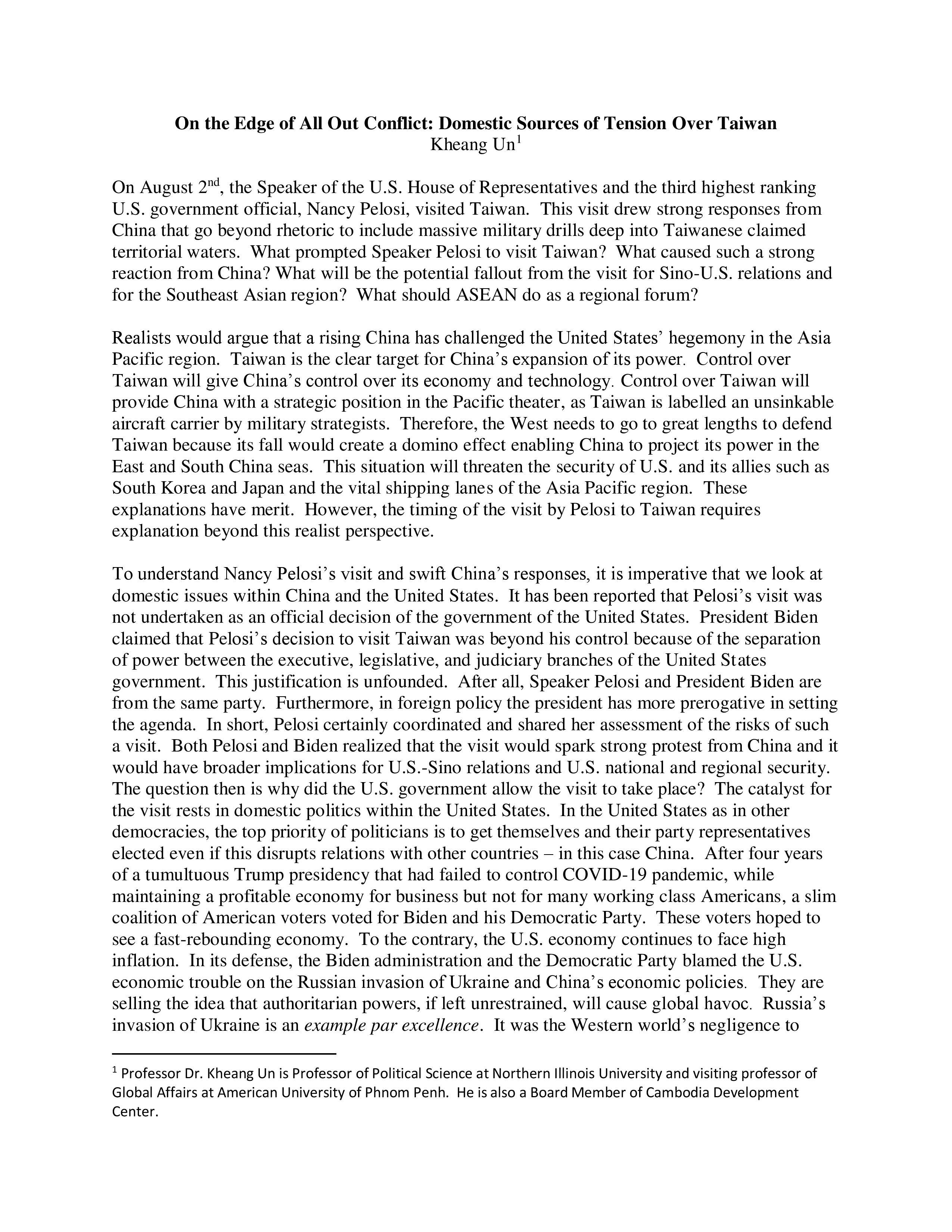 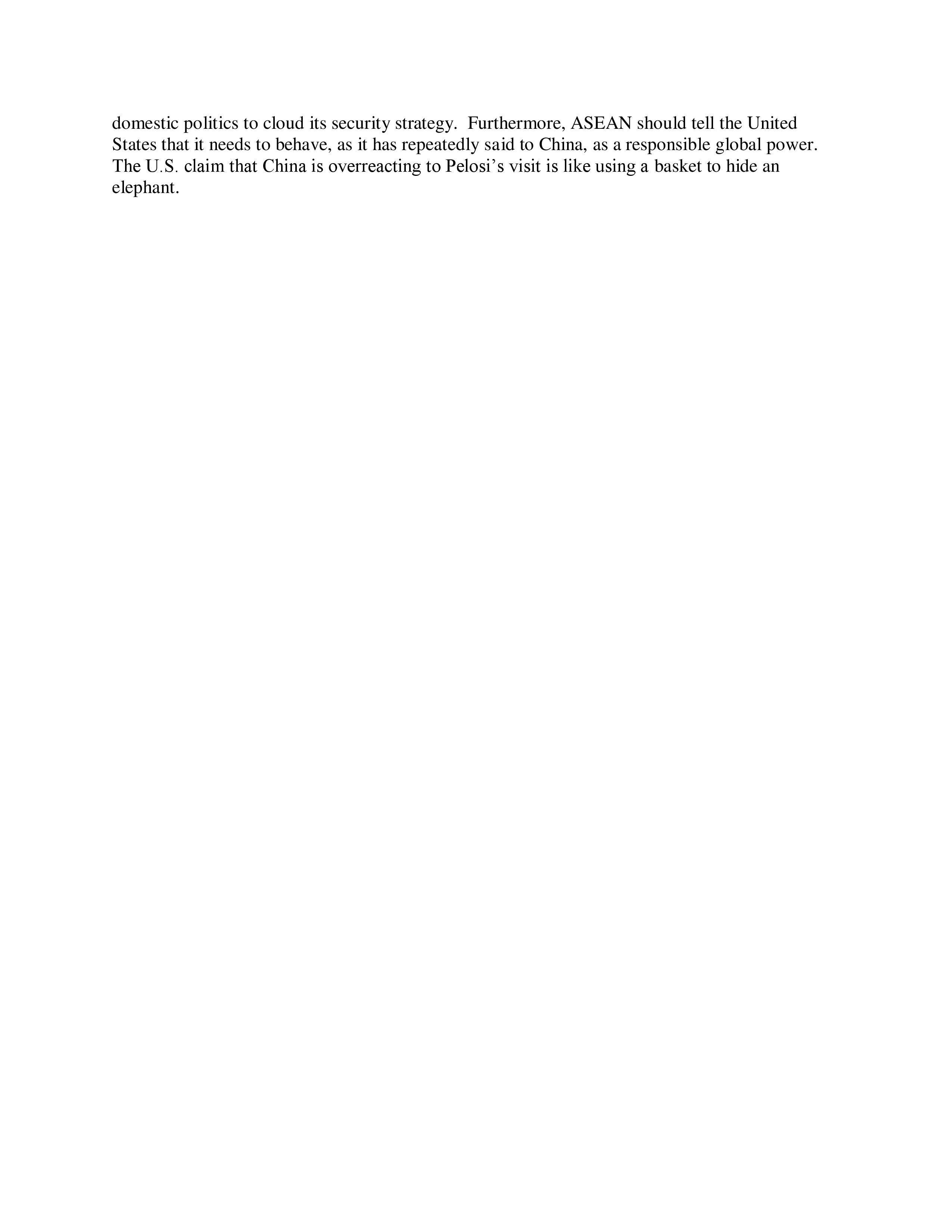