Phnom Penh (FN), Aug. 16 – On August 12, Chinese ambassador to Cambodia Wang Wentian was interviewed by Cambodian media, touching on the "six achievements" of state councilor and foreign minister Wang Yi's attendance at the series of foreign ministers' meetings on East Asia cooperation and his visit to Cambodia.

First, gaining firm support for the "One China" principle from countries in the region. The visit coincides with Pelosi's visit to Taiwan. State councilor Wang Yi expounded China's solemn stance on the US's provocative actions infringing upon China's sovereignty on various bilateral and multilateral occasions. America's treachery and deliberate provocation on the Taiwan issue can only further bankrupt America's credibility. Cambodian King Norodom Sihamoni, Prime Minister Hun Sen, Deputy Prime Minister and Minister of Foreign Affairs Prak Sokhonn, successively expressed their positions. The Cambodian Ministry of Foreign Affairs and the Cambodian People's Party issued a statement, emphasizing that Cambodia firmly adheres to the “One China” policy and supports China in safeguarding its core interests. Russia, Laos, Indonesia, Brunei, Malaysia, Vietnam, Singapore, Bangladesh, Greece, Turkey, New Zealand and others on the bilateral and multilateral occasions of the meeting made it clear that they adhere to the “One China” policy and hope to maintain a peaceful and stable international and regional environment. The ASEAN foreign ministers issued a statement reaffirming the “One China” policy and calling for adherence to the principles of the UN Charter.

Second, reacting to groundless accusations made by the United States and its allies. During the meeting, some countries not only spread rumors about the situation in the Taiwan Strait, slandered China, and slandered China's countermeasures, and also made outrageous remarks about the South China Sea disputes. State councilor Wang Yi not only launched a vigorous and comprehensive response at the meeting, but also explained the truth of the matter, safeguarded national sovereignty, and adhered to international justice. The state councilor also holds several interviews with the media to fully express China's position. He warns the United States not to act recklessly and not to escalate the crisis. He also warns the United States to fulfill its commitment to respect China's sovereignty and territorial integrity on the Taiwan issue, stop interfering in China's internal affairs, and stop condoning and supporting "Taiwan independence" forces; pointed out that the biggest risk affecting the peace and stability of the South China Sea is the improper intervention of foreign powers and frequent interference, requiring countries outside the region to abide by their duties and earnestly respect the efforts of regional countries to maintain peace and stability in the South China Sea.

Third, the strong voice of the era dedicated to peaceful development. State councilor Wang Yi pointed out that the world is constantly changing and facing an unprecedented COVID19 pandemic. The international and regional situation is complex and evolving, with uncertainty and instability. However, the expectations of regional countries to maintain peace and stability and promote common security have not changed. He hopes that accelerating economic recovery and achieving sustainable development needs will not change, nor will the spirit of solidarity and cooperation to overcome difficulties together. Countries in the region should strengthen cooperation, promote common security, attach importance to and respect the legitimate security concerns of other countries, and jointly maintain peace, stability and development in the Asia-Pacific. The global security initiative proposed by President Xi Jinping is similar to the security concept advocated by ASEAN, and is in line with the purpose of the Treaty of Amity and Cooperation in Southeast Asia. We can discuss the implementation of the initiative in ASEAN. China's position has been positively responded to by all participants. The ASEAN Foreign Ministers' Meeting issued a statement on reaffirming the maintenance of the Southeast Asia nuclear-weapon-free zone proposed by China, the core of which is to support the non-proliferation efforts of regional countries.

Fourth, maintaining ASEAN-centered regional cooperation structure. The United States peddles the "Indo-Pacific" strategy, engages in "small gangs" in the region, and undermines the ASEAN-led regional cooperation structure. State councilor Wang Yi emphasized that East Asian cooperation must maintain the correct direction, uphold openness and inclusiveness, adhere to the Asian approach, expand and strengthen the cooperation platform centered on ASEAN, and oppose ideological demarcation and the introduction of confrontation within small opposition groups that are discriminatory and potentially detrimental to regional structures. The Chinese side issued a position paper during the meeting, clearly supporting the ASEAN-centered regional cooperation framework and promoting the synergy between the "Belt and Road" initiative and the Global Development Initiative and the ASEAN Indo-Pacific Outlook, which is widely welcomed by ASEAN countries. All parties believe that it is necessary to adhere to open regionalism, promote genuine multilateralism, and contribute to the "Asian Plan" and "Asian Power". Be wary of foreign forces provoking camp confrontation and maintain the hard-won situation of peaceful development.

Fifth, expanding new connotations and new frontiers of regional cooperation. The biggest achievement of the China-ASEAN Foreign Ministers' Meeting is to fully implement the consensus reached at the 30th anniversary of China-ASEAN dialogue relations, to sort out the progress made in 36 areas in the construction of the "Five Homes" over the past six months, and to reach an action plan for China-ASEAN comprehensive strategic partnership, and planned the next cooperation focus and direction. State councilor Wang Yi advocated that regional cooperation should continue to adhere to "development priority and people's livelihood priority", increase engagement in areas such as poverty reduction in order to better solve development issues and achieve common development.

China has put forward a series of cooperation initiatives under the frameworks of China-ASEAN (10+1) and China-Japan-ROK-ASEAN (10+3), including implementing food security cooperation initiatives, supporting trade and investment liberalization and facilitation, and supporting 10+3 emergency medical supplies. The construction of reserve centers, the expansion of digital infrastructure, e-commerce, digital logistics, smart cities and other fields of exchanges and cooperation were welcomed by all participants. All parties agreed to jointly build the "Belt and Road" with high quality, actively participate in the construction of new land-sea corridors, ensure smooth production and supply chains, maintain food and energy security, strengthen cooperation in e-commerce and clean energy, and continuously cultivate new growth points for cooperation.

Sixth, strengthening the building of a community of shared future between China and Cambodia. During state councilor Wang Yi's visit to Cambodia, he met with King Norodom Sihamoni, Prime Minister Hun Sen, Deputy Prime Minister and Minister of Foreign Affairs Prak Sokhonn and the future prime minister candidate of the Cambodian People's Party Hun Manet, on deepening the comprehensive strategic partnership between the two countries and strengthening practical cooperation in various fields as well as cooperation and in-depth communication on international and regional issues of common concern to reach broad consensus.

The two sides agreed that China and Cambodia have maintained frequent high-level exchanges and continuously enhanced political mutual trust, which has injected strong impetus into the development of China-Cambodia relations and the consolidation of their hard-core friendship. Mutually beneficial cooperation between the two countries must be strengthened with a strong foundation. Joint construction of the "Belt and Road” has achieved remarkable fruitful results, which benefit the people of both countries. The two countries have joined hands to fight the pandemic, and the Chinese vaccine has effectively helped Cambodia safeguard people's lives and health, speed up economic recovery and restore normal social life. The two sides agreed to strengthen the alignment of development strategies, implement the China-Cambodia Free Trade Agreement and RCEP, and strengthen cooperation in the fields of economy, trade, people-to-people and cultural engagement, defense, and youth. China will continue to provide vaccine assistance according to Cambodia's needs, carry out cooperation in traditional Chinese medicine, import more Cambodian high-quality agricultural products, increase Cambodian flights to China, and facilitate Cambodian students returning to China to resume classes.

Ambassador Wang Wentian said that China and Cambodia are traditional neighbors and ironclad friends. The China-Cambodia friendship forged and nurtured by the leaders of the two countries has withstood the test of international vicissitudes and the baptism of storms. It is rock solid and unbreakable. China-Cambodia relations are at the best period in history and facing unprecedented opportunities. China is willing to, together with Cambodia, take the 65th anniversary of the establishment of diplomatic relations next year as an opportunity to enhance political and strategic mutual trust, deepen cooperation in anti-pandemic and development, and make the path of China-Cambodia friendly cooperation grow more widely. China will continue to firmly support Cambodia's smooth performance of the ASEAN rotating chairmanship in 2022, promote the continuous development of East Asia cooperation, and make new and greater contributions to regional and world peace, stability and prosperity.
=FRESH NEWS 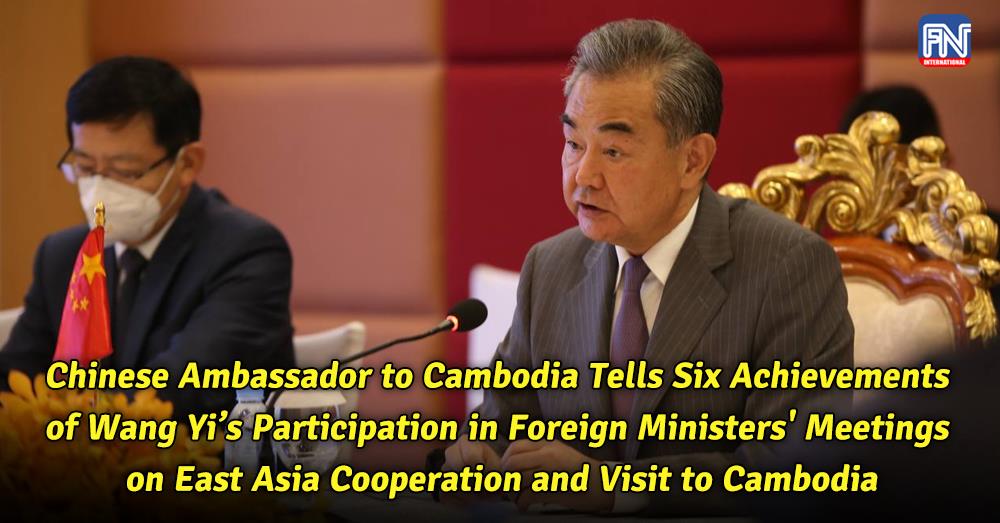