Phnom Penh (FN), Aug. 16 – The Embassy of Indian in Phnom Penh celebrated the 75th Independence Day of India , held on 15 August 2022 with exuberance at the Embassy premises in the morning and grand reception held in the evening at Hyatt Regency Phnom Penh. The reception was organized as part of Iconic Week celebrations of the Azadi Ka Amrit Mahotsav (AKAM). To mark the 75th anniversary of India’s Independence Day from 8-16 August 2022, the Embassy organized a weeklong series of events celebrating cultural, religious and development achievements and connects of India and Cambodia. The AKAM is an initiative of the Government of India to celebrate and commemorate 75 years of progressive India and glorious history of its people, culture and achievements.

The morning function commenced with the unfurling of the National Flag by Devyani Khobragade, ambassador of India to the Kingdom of Cambodia and the reading of the president of India's address to the nation. The president of India, in her address, touched upon various topics including India's journey since independence, essence of the Constitution of India, women's right to vote right from the very beginning of the Republic, celebration of 15th November as 'Janajatiya Gaurav Divas" as a homage to the tribal heroes of India, India's quest for Atmanirbhar Bharat (Self Reliant India). India's 200 Million vaccination drive, India's economic reforms etc. President specially mentioned Indian women's progress in breaking many glass ceilings - including that more than fourteen hundred thousand elected women represent India in the Panchayati Raj (local governance) Institutions.

Following the speech of the president, ambassador Khobragade interacted with the members of the Indian community over light Indian refreshments.

In her speech, Ambassador conveyed wishes to Indians and diaspora on the occasion of 75th Independence day and highlighted India's journey since 1947. On the 70th Anniversary of the India-Cambodia bilateral relationship, she expressed satisfaction at the trajectory of 70 glorious years of cooperation between the two countries and reiterated India's resolve to enhance the relationship - on her part, by adding newer dimensions to our partnership. Ing Kantha Phavi in her remarks wished Indian citizens on the 75th Independence Day and congratulated India on its magnificent achievements in all fields. Women’s affairs minister also stated that the 70 years of Establishment of Diplomatic relations between India and Cambodia would further lead to boosting of relations between two countries in all areas of cooperation and particularly noted the increase in two-way trade. She also appreciated India's contribution of COVID19 vaccines to Cambodia, support to ASEAN COVID19 Response fund. She also welcomed the designation of 2022 as ASEAN Friendship year.

Ambassador and the chief guest raised a toast for the health and happiness of His Majesty and the Queen Mother, and for the people and friendship of India and Cambodia.

The reception also showcased a photo exhibition on India's journey since Independence. The guests were also treated to an enthralling Indian Bharatanatyam dance performance fused with Cambodian music performed by Indian dance teacher Kapil Sharma. Master chef Jhupa Singh, who specially flew in from India for the AKAM celebration offered an exquisite experience of Indian high dining to the guests.
=FRESH NEWS 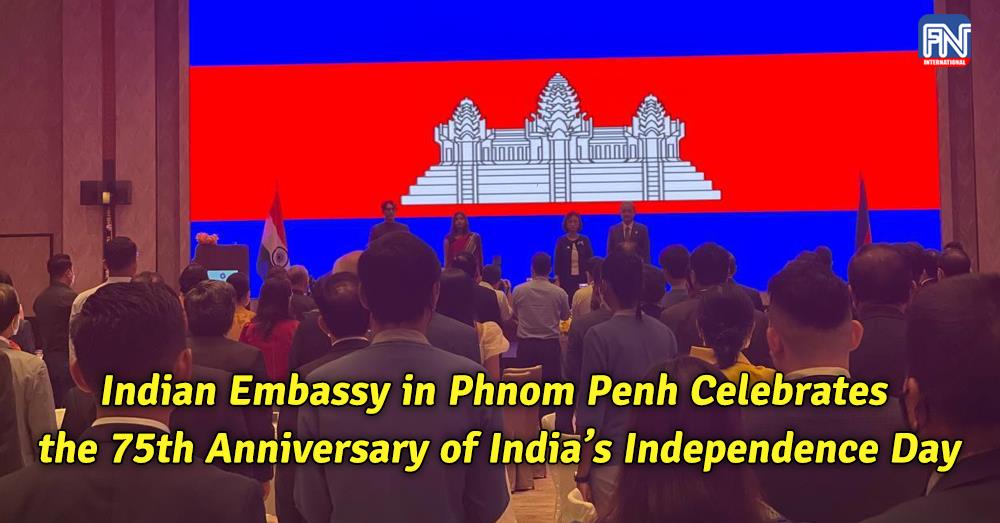