Japan Releases Statement on the Completion of the Khmer Rouge Trials

Phnom Penh (FN), Sep. 22 – Embassy of Japan in Cambodia released a statement by Japanese foreign minister Hayashi Yoshimasa on Thursday (Sep 22) regarding the completion of the Khmer Rouge Trials.

According to the statement seen by Fresh News on Thursday (Sep 22) as follow:

“1. On 22 September, the Supreme Court Chamber of the Extraordinary Chambers in the Courts of Cambodia (ECCC) pronounced the appeal judgement upholding the pronouncement by the Trial Chamber (the sentence of life imprisonment) in Case 002/02 concerning Khieu Samphan. This judgement completed long-lasting Khmer Rouge Trials. Japan pays its respect to many people who contributed to the trials.

2. The Khmer Rouge Trials are a crucial step toward the conclusion of the entire peace process in Cambodia, and contribute to delivering justice and strengthening the rule of law in the country. In light of this, Japan has been playing a leading role in the international community in extending support for the trials.

3. Japan hopes that the significance of the trials will be widely understood among the Cambodian people and succeeded as a legacy for the next generations and the international community through educational activities, which are to be continued after the completion of the legal process, and it will contribute to strengthening the rule of law.” 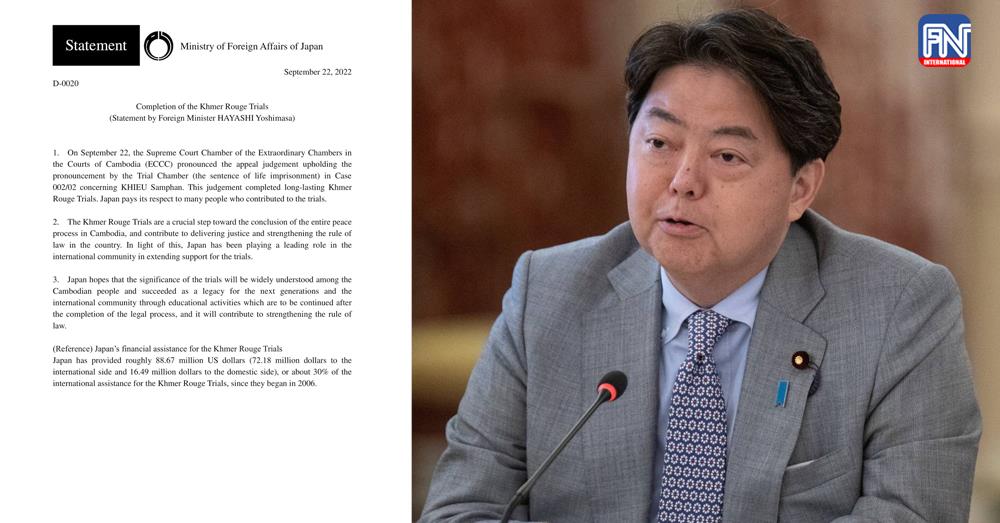