RIO DE JANEIRO, Aug. 31 (Xinhua) — Michel Temer was sworn in as the Brazil's new president on Wednesday shortly after lawmakers ousted Dilma Rousseff from her presidency in an impeachment vote.

The Senate voted 61-20 to immediately remove Rousseff from office after a marathon debate, ending the long impeachment process.

Temer will serve out the rest of Rousseff's four-year term through 2018.

At the first meeting after his inauguration ceremony, Temer vowed to put Brazil back on track in all areas.

Temer said he would urgently seek support from various parties in Congress to tackle urgent issues, including unemployment.

"We have a huge unemployment rate, almost 12 million (jobless) people. This is a frightening number," said the 75-year-old president.

In a separate voting earlier in the day, the Senate voted 42-36 to allow Rousseff to retain the right to hold public office. It needs a two-third majority to bar her from public role for eight years.

The impeachment vote sparked quick reactions both in Brazil and overseas.

Brazil's Central Union of Workers, a stalwart Rousseff ally, criticized the impeachment as "a coup" while the National Confederation of Agriculture hailed it as a "victory for the nation."

Ecuador, Venezuela and Bolivia criticised the impeachment and withdrew their ambassadors to Brazil. Brazil responded by recalling its envoys for consultations.

The Argentine government issued a statement, saying it respected "the verified institutional process" in Brazil and expressing its desire to work with the new Brazilian government on issues of common concern, such as the integration of the Southern Common Market (Mercosur).

Rousseff is charged with spending without congressional approval and manipulating government accounts in the run-up to her 2014 re-election. She was suspended on May 12 for up to 180 days.

Rousseff became the first Brazilian president removed from office since 1992, when Fernando Collor de Mello resigned just before the final vote in the impeachment process against him. 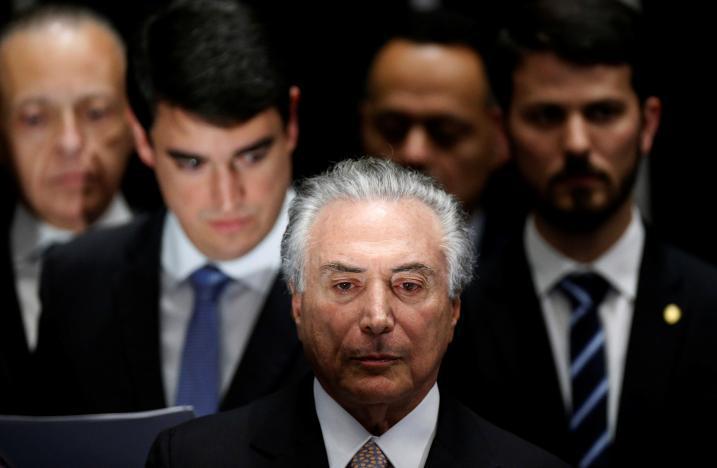