10 killed, 9 injured in suicide attack on court in Pakistan

ISLAMABAD, Sept. 2 (Xinhua) — At least 10 people were killed and nine others injured in a suicide blast in a district court in Pakistan's northwestern city of Mardan on Friday, officials said.

District Police Officer Faisal Shehzad said that the incident took place when a suicide bomber hurled a hand grenade to police guards at the entrance gate and rushed to the courthouse, but a police guard chased him and opened fire at him before he could entered the court room.

Firing at the suicide bomber caused the explosion of his jacket that killed 10 people, including two policemen and two lawyers.

Earlier reports said the suicide bomber blew himself up at the entrance gate when guards asked him for body search.

Local Urdu TV channels said that at least 10 people were killed and over 40 others injured in the attack, but officials did not confirm the figure.

According to rescue officer Haris Habib, at least six of the injured were in critical condition who were being treated in the intensive care unit of the Mardan Medical Complex hospital of the city.

Emergency has been declared in all the hospitals of the district.

Police and security forces have launched a search operation in the surrounding areas. 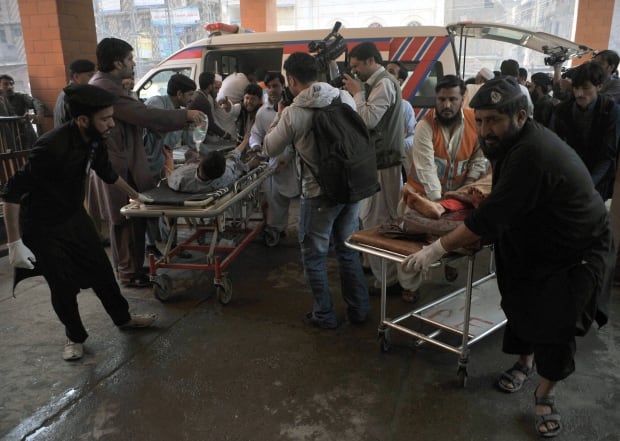