SYDNEY, Sept. 19 (Xinhua) — Cerro, the Galapagos tortoise, one of Australia's Perth zoo oldest residents turned 50 on Monday, prompting the zoo to thrown in a big celebration for the reptile.

Perth Zoo in a statement on Monday said its keepers were celebrating the momentous occasion with a specially created fruit birthday cake comprising of watermelons, oranges, strawberries and papaya for the tortoise.

"Tipping the scales over 200 km, Cerro loves his food, so there was no better way than to celebrate with a cake filled with some of his favorite treats including watermelon, kiwi fruit, pumpkin and strawberries," Perth zoo keeper Emily Trainer said.

"These tortoises don't have a good sense of smell, so they use their eyes to find food," she said.

"Anything red really gets Cerro's attention, he loves any brightly colored foods."

"He is the less dominant tortoise out of the two we care for, except when there is food around, then he gets a bit of speed up to make sure he eats first," she said.

"Cerro" was originally born at the San Diego Zoo in the U.S. and arrived at Perth with his younger brother Sierra in 2005.

"Despite turning 50, for a tortoise Cerro is still considered a youngster," Trainer said.

To date, the oldest Galapagos tortoise on record was thought to be around 175-years-old.

Galapagos are known to be the largest tortoise in the world.

With less than 20,000 individuals remaining in the wild, they are vulnerable to extinction.

Main threats to Cerro's wild cousins include introduced species such as rats, dogs, and cats, which eat its eggs and young tortoises.

The zoo said in a warmer months, visitors can get up-close and personal to "Cerro" and "Sierra" during an "Eye to Eye" animal encounter, which provides a unique opportunity to feed these prehistoric gentle giants. 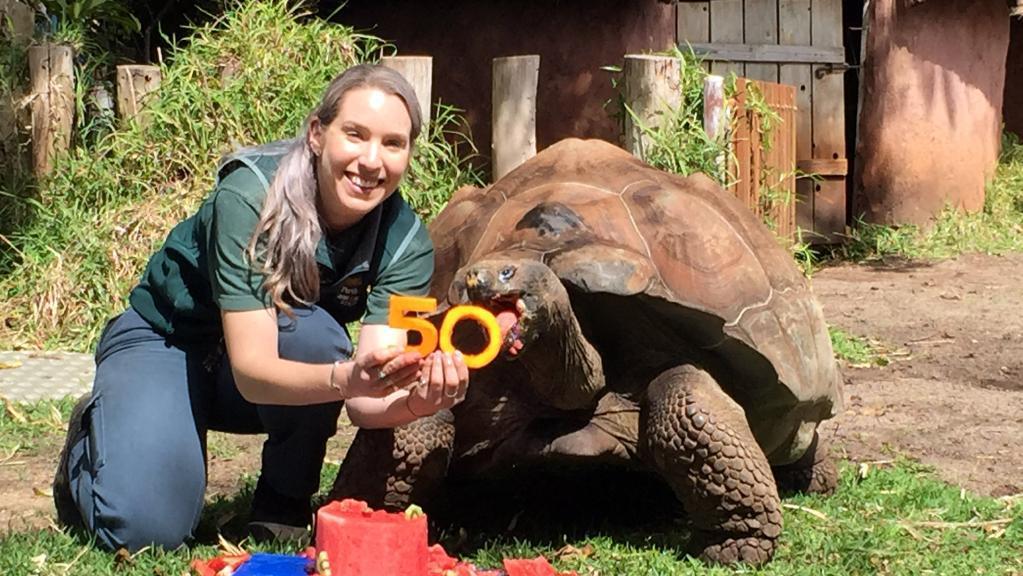