UNITED NATIONS, Sept. 19 (Xinhua) — China on Monday pledged additional 100 million U.S. dollars in annual aid to UN development agencies in 2020 on top of the amount in 2015.

Chinese Premier Li Keqiang made the announcement when he chaired a roundtable on the Sustainable Development Goals (SDGs) at the United Nations headquarters in New York.

He also announced that China's donation to the Global Fund to Fight AIDS, Tuberculosis and Malaria will reach 18 million U.S. dollars in next three years.

"China will continue to make unremitting efforts to promote sustainable development and will actively participate in the cooperation with the international community in this area," the Chinese premier stressed.

Calling the sustainable development "a common cause for the whole world," Li urged the international community to solve the issue of unbalanced development, promote inclusive economic growth and jointly address thorny issues including refugees and immigration, public health and climate change.

China has fully started the implementation of the 2030 Agenda for Sustainable Development, Li said, noting that the country is confident about lifting all poverty-stricken population out of poverty by the Chinese standard by 2020 and reaching the standard of moderately developed countries by 2030.

Last December, the historic Paris Agreement was adopted by the 196 parties of the United Nations Framework Convention on Climate Change (UNFCCC) following the UN's adoption of the 2030 Agenda for Sustainable Development for people, the planet, peace, prosperity and partnership in September.

Hailing Li's ability to bring almost all UN agencies' heads to the roundtable, Ban said he saw the strength of China.

He commended China's inclusion of SDGs in the core of its national development plans, calling for more efforts from the international community to address the challenges.

Thomson lauded China for ratifying the Paris Agreement earlier this month. He called on countries to follow China's example to ratify the agreement at an early date. 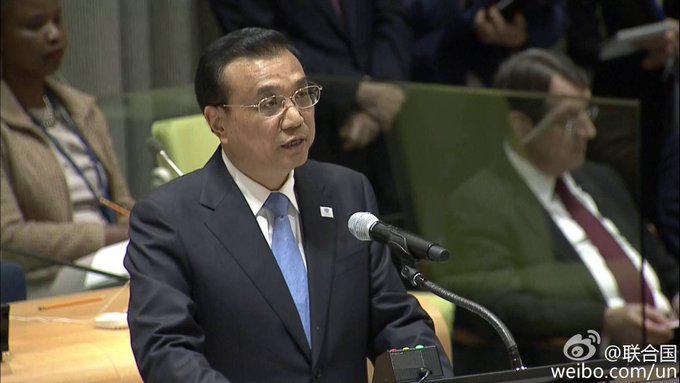