WASHINGTON, Sept. 24 (Xinhua) — Police in the U.S. city Charlotte, North Carolina on Saturday released the police bodycam and dashcam videos of the fatal shooting of a black man after days of protests and violence.

In addition to the two videos, the Charlotte-Mecklenburg Police Department (CMPD) also released three photos of a handgun, a holster, as well as a marijuana "blunt" that belonged to Keith Lamont Scott, the 43-year-old victim who was killed by a police officer on Tuesday.

The police move came under increasing pressure from Scott's family and the public after the shooting sparked four days of protests and riots.

Scott was shot and killed by CMPD police officer Brentley Vinson, also an African American, who was serving a warrant on someone else with other officers when they encountered Scott at an apartment complex Tuesday afternoon.

The CMPD said police officers at the scene saw marijuana and a weapon inside Scott's car and that Vinson opened fire after Scott refused to obey police commands to drop a handgun.

But Scott's family and residents disputed the police claim, insisting that Scott was holding a book instead of a gun.

In a police video, Scott was seen slowly walking backward out of his car before the shooting. He neither pointed a gun at the officers nor made sudden movements.

In response to the release of police videos, Justin Bamberg, attorney for Scott's family, told a news conference Saturday evening that he did not see anything in the videos that would lead to the loss of Scott's life.

He said the most important question that should be answered is whether Scott's actions justified the police shooting.

Ray Dotch, Scott's brother-in-law, said that the family was left with far more questions than answers by the videos. Scott "was an American citizen who deserves better," he added.

Indeed, people cannot clearly tell from the cellphone video released Friday, which was shot by Scott's wife during the shooting, that an object left on the ground near Scott's body was a gun or not.

In the video, Rakeyia Scott repeatedly told the police officers not to shoot his husband because he had no gun and was just taking his medicine. But the officers were heard opening fire minutes after they shouted commands to Scott to drop a gun.

In a news release distributed Saturday with the videos and photos, the CMPD detailed the fatal encounter between its officers and Scott Tuesday afternoon, alleging that Scott possessed marijuana and a handgun and ignored officers' repeated loud verbal commands to drop the gun.

A lab analysis of the gun recovered at the scene "revealed the presence of Mr. Scott's DNA and his fingerprints" on it, the CMPD claimed.

CMPD chief Kerr Putney told a news conference earlier Saturday that he decided to release the videos to the public after determining that the release would not have an adverse impact on the investigation.

The shooting incident has sparked four nights of protests in Charlotte, including two nights of violent riots on Tuesday and Wednesday. Protesters have demanded the police release the tapes of the shooting.

A state of emergency was declared Tuesday in Charlotte, followed by a curfew that was imposed from midnight Thursday. Protests continued on Thursday and Friday in the city, but were mostly peaceful. 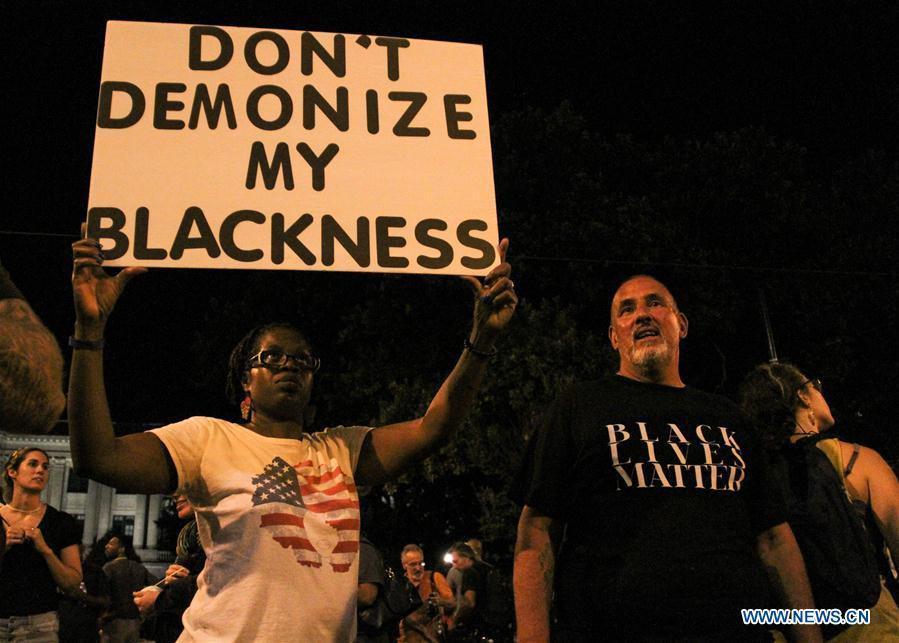