Turkish leader to United Nations: Be 'much more influential'

UNITED NATIONS, Sep 20 (AP) - Turkey’s leader, overseeing a nation encircled by regional disputes, used his speech at the UN General Assembly on Tuesday (Sep 20) to shine a spotlight on Turkish maneuvering in conflicts that span from Syria to Ukraine.

President Recep Tayyip Erdogan’s speech comes as Turkey is beset by staggeringly high inflation - officially at 80 per cent, but more than double that, analysts say.

Erdogan blamed inflation on globally high food and energy prices rather than his government’s economic policies. His speech, however, focused more on laying out his view of Turkey’s role in the world. He said Turkey is “trying to be part of the solution” in conflicts around the world.

Touching on multiple hot-button issues, he spoke about the need for stability in Iraq, fair elections in Libya, food security in the Horn of Africa, the need for Palestinian statehood, the rights of Rohingya Muslims in Myanmar and Uyghur Muslims in China, and standing up to anti-Muslim sentiment globally.

His remarks also highlighted Turkey’s role in these many conflicts, either directly or indirectly. This includes direct attacks in eastern Syria against US-backed Kurdish fighters, high-level diplomacy in Ukraine, a troop presence in Libya backing the Tripoli-based government, long-simmering tensions with Cyprus and Greece, and staunch support for Azerbaijan in its conflict with Armenia.

“All these disasters affecting millions of people show the United Nations will have to be much more effective, much more influential,” he said.

Erdogan has emerged as a key player in the Ukraine conflict. Turkey is a NATO member and has supplied Ukraine with lethal drones targeting Russian troops, but Erdogan has also met multiple times with Russian President Vladimir Putin and Turkey was a broker alongside the United Nations in securing the safe passage of Ukrainian grains exports through the Black Sea.

Turkey, he noted, has also hosted 4 million Syrian refugees in that country's long-running war. At one point during his speech, Erdogan held up a photo of dead Syrian refugee children to emphasize the need for continued support.

He said the United Nations needs to be more inclusive - and the Security Council should be more democratic and functional.

“The world is greater than five,” he said, referring to the Security Council’s five permanent members.

Erdogan, 68, has led the country for almost 20 years, first as prime minister and then as president. Support for him and his party, however, has declined due to the cost-of-living crisis. He survived an alleged coup in 2016, unleashing in its wake a widespread crackdown against government critics, journalists, politicians and activists. 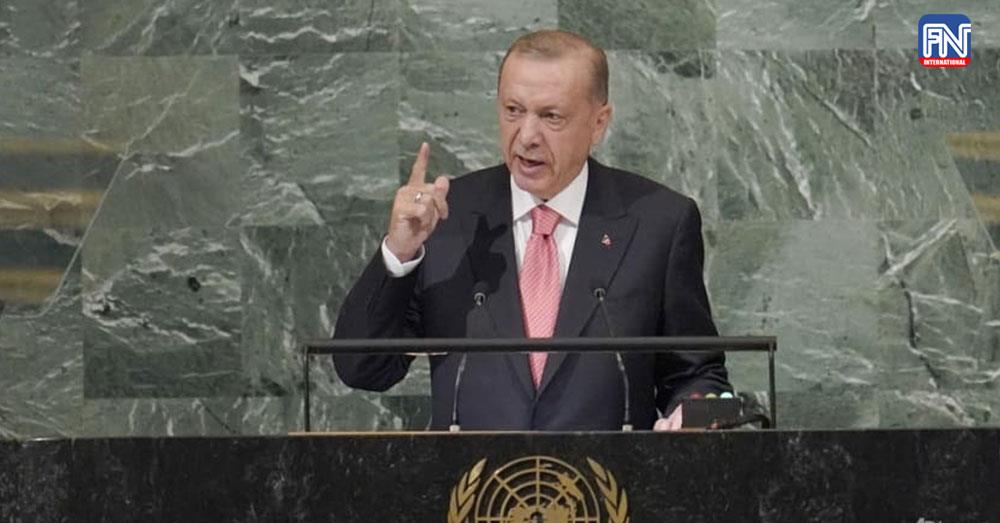