Fire kills 15 at bar in Russian city of Kostroma

MOSCOW, Nov 5 (AFP) - A fire Saturday killed at least 15 people at a bar in the Russian city of Kostroma, Russian news agencies reported.

The night-time fire at the popular bar could have been started after a drunk man fired a "flare gun" on the dance floor, the TASS news agency reported.

State television showed images of the bar -- called "Poligon" and housed in a single-storey logistical centre -- engulfed in flames.

Authorities said the fire started at around 2:00 am local time and was put out at around 7:30 am.

Governor Sergei Sitnikov earlier said 13 people were killed, but emergency services then said the remains of two other people were found.

"Two more bodies were recovered. This means the number of victims is now 15," the TASS news agency quoted law enforcement sources as saying.

Around 250 people were evacuated from the building when it caught fire in the city around 300 kilometres (180 miles) northeast of Moscow, authorities said earlier.

The TASS news agency, citing sources in emergency services, said a drunk man with a "flare gun" was likely to have caused the fire.

"He was spending time in the bar with a woman, ordered her flowers, with a flare gun in his hands," the source told the agency.

"Then he went to the dance floor and fired it."

Local emergency services said the blaze had spread out over 3,500 square meters.

On its website, Poligon says it acts as an evening and night-time "place for recreation and entertainment".

By day, it is a typical Russian "stolovaya" -- a casual restaurant serving traditional food.

It says it is housed in a "distribution centre" and is popular with traffic police.

State television showed images of dozens of emergency workers fighting a huge fire that had engulfed the single-storey building.

The sign "Poligon" was visible amid the flames raging on its roof.

One fire fighter told regional state television that it took 50 people to extinguish the fire and that they had used 20 fire engines.

He said the fire was especially difficult to put out because of the risk of the building collapsing.

Kostroma, a city on the Volga river of around 230,000 people, is one of Russia's oldest cities and is famous for its medieval architecture and monasteries. 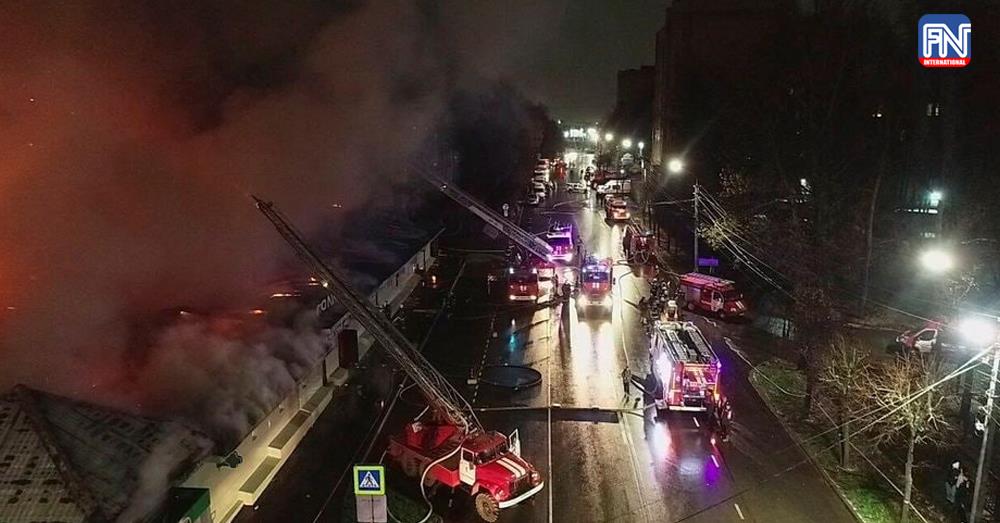