PM Hun Sen: Full-pledged Implementation of RCEP Will Boost Trade Volume by about $40B, Studies Show (Video Inside)

The premier spoke at the opening ceremony of the high-level forum at the 10th anniversary of the RCEP agreement, and the official launch of the book on the framework for regional integration by the Economic Research Institute for ASEAN and East Asia (ERIA), held on Wednesday morning (Nov 2).

For almost three years, the COVID19 pandemic has proved that the Asian economies are relatively resilient since Asia is a fast-growing economic, trade and innovation hubs, especially in East Asia region which has deep integration in the global value chains and is an important connecting dot for the global economy.

"Studies by major international institutions have shown that a full-pledged implementation of RCEP will boost trade volume by approximately USD 40 billion, increase real income by up to 2.5 percent, upswing trade activities amongst RCEP members by 12.3 percent and help uplift the livelihood of an additional 27 million people into the middle class for the RCEP region by 2035 while RCEP is estimated to increase global incomes by up to USD 263 billion," the premier underscored.

Samdech emphasized that despite being a less developed country, Cambodia is a highly open economy which strongly values rules-based multilateralism system and regional and global economic integration which overall is aligned with the objectives of the RCEP Agreement. In addition to RCEP, Cambodia also has the Bilateral Cambodia-China Free Trade Agreement entering into force on 1 January 2022, the same day as RCEP did, and Cambodia-Korea Free Trade Agreement which will enter into force on 1 December 2022, while Cambodia is continuing to explore the possibility of establishing free trade agreements with other partner countries.
=FRESH NEWS 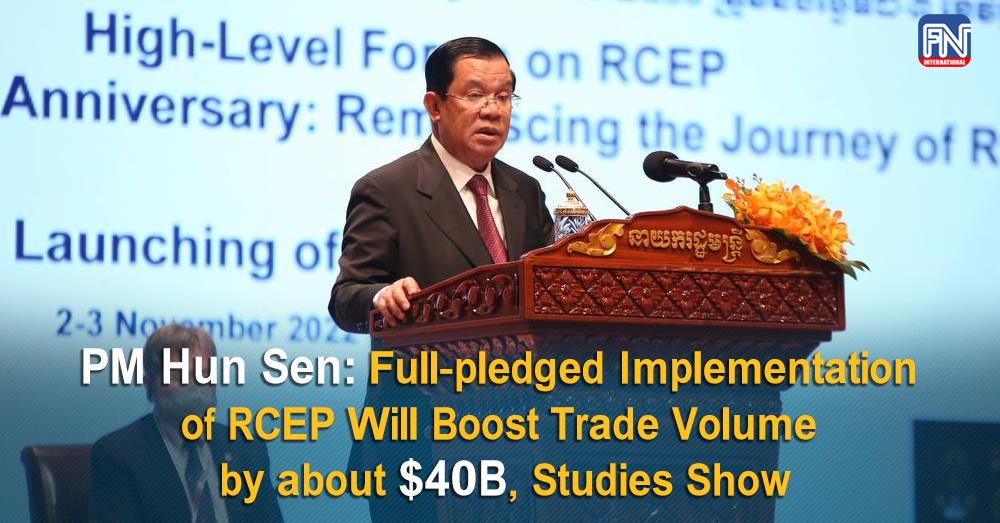